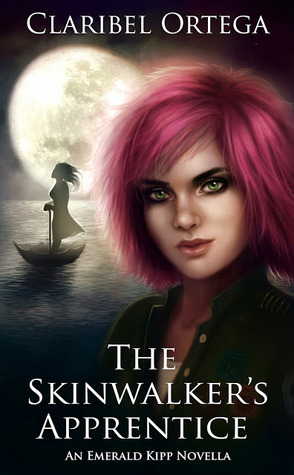 I’m going to write this review a bit different than my usual, since this is more of a novella and is a prologue to a new series-  Emerald Kipp and the Riddle of the Timekeeper.

The Skinwalker’s Apprentice is the start of what I anticipate to be a great new magic based series. A unique, yet realistic main female character; magic with a good mix of understanding and mystery; and very strong writing for a new author.

In The Skinwalker’s Apprentice, we follow 2 young witches; a colonial period witch named Margo Pennyfeather, and a 1980’s witch named Emerald Kipp.  Margo is from a poor immigrant family, and is chosen to become the apprentice to the head priestess and train to become a powerful which. Emerald lives with her aunt; and as far as she knows they are the only two witches around and have to keep their powers a secret.

I was surprised at how strong the writing was for a young author on her first work. Claribel does an excellent job with writing visually without over detailing and bogging the reader down with over depiction. Her character of Emerald Kipp has to be one of the most real characters I have read in a YA book in recent time. She will be a strong female character and looks to not fit a common mold YA readers are accustomed to.

The Skinwalker’s apprentice shows the research that Ortega put behind the book, making many accurate references to people, history, and time appropriate items for each character. I think fantasy writing with a backing in historic back is a winning combination for a fictional YA series.

The magic is exciting, and I cannot place it as similar to another work I have read. This series should form up to not be another cookie cutter magic series. The depth of the characters, especially the Priestess and most of the characters in Emeralds story line, was excellent for the short length of this eBook.

My star deduction comes from two points. First, I think the story of Emerald in this prologue did not have an ending; whereas Margo’s story had a clear beginning middle and end. My second qualm is that the chapters alternated very evenly for 3 quarters of the book before leading into a long string of consecutive Margo chapters. The Margo chapters were exciting and I can see why they were strung together, but it shook the flow up a little.

Definitely read The Skin walker’s apprentice. I think this will be a great series. I look forward to reading the first full story. CHeck back next weekend for an interview with Claribel about The Skinwalker’s Apprentice and The Emerald Kipp Series.

One response to “The Skinwalker’s Apprentice by Claribel Ortega- Review”