Gift of the Phoenix by Donna Cook – Review 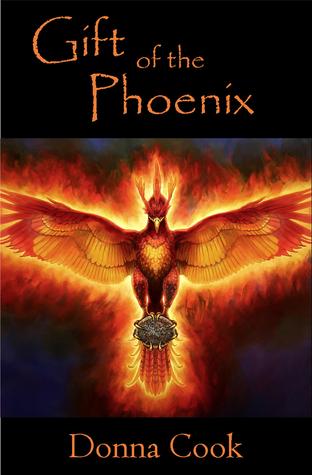 Check out my Interview with Author Donna Cook

This book belongs in the “epic” genre. Gift of the Phoenix is an exhilarating read. Fans of Eragon and The Lord of the Rings will want to add Gift of the Phoenix to their bookshelves.  Donna Cook writes an epic fantasy with an extensively layered story line.

I was amazed at the intricacy on the intertwined plots. It was very hard to predict the course of events from start to finish. Gift of the Phoenix surprised me at every turn and kept me on the edge of my seat.

Gift of the Phoenix reminds me of a mix of Paolin’s Eragon and Tolkien’s Lord of the Rings, but stands on its own as a unique fantasy-adventure. Cook creates a magic system that is intricate and unique, which can be hard to do in a genre littered with magic.

The story is as much a mystery as it is an adventure. The story is very complex, and yet very easy to follow.  I am truly amazed at the seamless-ness of the novel, no stone was left unturned in this storyline. The story is layers upon layers of intertwined plots that all culminate to a fantastic ending.  It could well be a stand alone novel, yet at the end cook tells us there is a sequel coming!

Cook’s characters all have great depth and uniqueness. They have their own feelings and ideologies and are expressed naturally throughout the course of the novel. All of the characters are well rounded and none of them feel over the top or unbelievable. I felt like I could really describe each of the characters as a person, rather than a fictional character.

I love the magical structure Cook created for this realm. The magical inhabitants of the real have have great knowledge of what magic exists, but as a whole much of magic is still a big mystery. There is an order set up by the wizards, but at the same time there are those not in the order as well.  The magical structure and laws set in this realm is creative and original, but has familiarity to what a fiction reader would perceive as in the realm of possibility.

Characters have great depth and individuality.

The length might be a little daunting for young readers.

( won’t give much story away here other then the very base idea, no spoilers!)

Gift of the Phoenix is a very large, 3 part book. Part one is long enough to be it’s own story, and parts two and three could have been made into a sequel to part one.  The fact that this much story was fit into one novel makes me very excited for the sequel to Gift of the Phoenix.

Part I: The Gathering, takes up nearly half of this 575 page novel. We are introduced to Corren, Nicolai, and Marcellus; three men from different walks of life who find themselves linked by 3 stones given to them by a very old wizard. This starts their journey together to stop “The Cunning One” from essentially stealing all the magic in the real.

Part II felt like sitting in a roller coaster going up the chains to the first drop; your excitement builds as you prepare for an exciting plunge. You don’t know how fast or how long the drop will be, but you know it is coming. The reader will see more and more of the story lines tie together, but still not be able to see how the story will end.

Par III is that plunge down the first drop of the roller coaster. I really felt as if I was falling while reading. After that you just hold on as best you can and try not to get woozy as the story excitingly whips you left and right. Part III is pure action and adventure as all the characters come together for the final magical clash to save or end their realm.

(As I have already said a few times…) Cook layers her story like a seasoned pro. The mystery of the cunning one kept me guessing through the entirety of Part I. Cook wrote so many open ended characters and story lines that I could not begin to guess the direction her writing was going in. Other than the three main characters, it could have been any number of people or groups that could be “the cunning one.” Every characters relationships and sub plots are engaging and add depth and value to the main plot.

It was exciting to see the plot lines come together in Part II, and reach the final climax in Part III. Every time I expected something to happen-it didn’t; making this story unpredictable and exciting.

Cook writes tense conversations really well. There were a couple of argument/discussions between two or more characters where I felt like I was hearing them rather than reading them. This type of skill in writing excites me as a reader.

Corren- A wizard who is given a red stone by Nashua. He is part of the Wysard branch of the Order of Ceinoth.He is curious and somewhat of a wizard prodigy.  He is very intelligent, curious, and has slight desire for power.

Nicolai- A farmer from Knobby Tree who has a yellow stone like Corren’s red stone. It was given to him by Nashua. He is very level headed and calm, and stays strong to his humble roots as a farmer.

Prince Marcellus- Prince of Caedmonia; Called Marcellus the Protector. He is a Brave, strong, and well loved son of King Clement. He has a blue stone given to him by Nasua. He is a very respected warrior and often called upon to govern the kingdom. He is confident in his abilities, but not arrogant.

King Clement- King of Caedmonia; Called Clement the Beloved. He is a weary king who loves and takes care of his people.

Princes Praea- Princess of Sakkara. She comes to Caedmonia to ask for aid in fighting Norrland, who she believes assassinated her brother. She seeks vengeance, and wants a full war with Norrland. She is intertwined in the destiny of the Corren, Nicolai, And Marcellus.

This is a book that I will want in Hardcover on a prominent shelf. The Gift of the Phoenix is an epic story with an impending sequel. I would recommend this book to anyone of any age. If you enjoy C.S. Lewis, Rowling, Tolkien, Paolini (or all of them) then do not miss out on reading Donna Cook.